We’ve all been there. Watching our team in an away game on a Saturday afternoon and aware of the fact that the players seem to be absolutely knackered. We’ve probably called them lazy and used some other choice language to make our feelings about them known.

But did you know that not all pitches are the same size? It could be that these players who think are being lazy are actually just not used to having to cover so much ground because the playing surface they’re on now is significantly different in its dimensions from the one in the team’s home ground. Here we’ll explain how it is that pitches can be so different and what, if any, difference it makes to the match you’re watching.

Pitch Sizes For Other UK Leagues

Here’s a really interesting quirk of the game. Football pitches not only don’t have to be the same size but, in fact, can cary wildly from each other because the rules state minimum and maximum widths and lengths rather than specific measurements that must be adhered to.

Of course one of the other things about a football pitch is that it must maintain its aspect ratio, so to speak, meaning that you’ll never see a pitch that is 90 metres by 90 metres. This may fit in with the minimum and maximum sizes but it wouldn’t keep the ratio correct so it wouldn’t be allowed.

Whilst there is no exact specification of dimensions that pitches have to adhere to, there is a suggested pitch size for clubs to work with. For senior teams that is 64.01 metres in width by a length of 100.58 metres.

The Premier League is not against adding further complications into the mix, either. In 2012 they attempted to standardise the pitch dimensions for teams in their division by adding rule K21 to their manifesto. It declared that “Unless otherwise permitted by the board, in league matches the length of the pitch shall be 105 metres and its breadth 68 metres”. All fine and dandy, but rule K22 then stated that clubs would be exempt from rule K21 “if it is impossible to comply with rule K21 due to the nature of the construction of the ground”. Clear as muck, as they say.

Does the Size of a Football Pitch Matter?

It is a question that men have been asking themselves for years, but does size really matter? the answer is: To some extent.

The importance of the size of a team’s pitch depends on a number of factors but it would be a lie to suggest that it is completely irrelevant. The biggest contributing factor is the style of football that the team likes to play, with the pitch’s dimensions either helping or hindering that fact.

As an example you can look at Tony Pulis. The man who seems to have a baseball cap surgically attached to his head is known for playing a long-ball style of football. During his time as manager of Stoke City Pulis demanded that the pitch meet the minimum possible dimensions. This allowed his long-ball style to be played more effectively and it created an opportunity for the club’s long-throw specialist Rory Delap to more accurately find his targets.

Another famous example of a pitch’s dimensions being used to the home team’s advantage came in 1987 when Graeme Souness was the manager of Rangers. His scouting of the club’s European Cup opponents Dynamo Kiev had revealed that the Ukrainian team played with very dangerous wingers who liked to hug the touchline. On the eve of the game Souness gave his groundskeepers an instruction that they should change the pitch around.

Souness: “The pitch didn’t have to be a fixed width as long as it was above a certain minimum, so I thought: ‘Right, I’ll make it the absolute minimum’. On the Tuesday afternoon the Kiev players trained on the pitch when it was the normal size. On Wednesday night they came out for the match and must have been shocked to discover that, after 15 paces, they were on the touchline … it wasn’t purist stuff, but it was within the rules”.

Teams that choose to defend with a ‘low block’ benefit from being on a pitch with smaller dimensions. The smaller the pitch is the less chance the attacking side has to move the ball around and pull the defending team out of position. Tottenham’s manager Mauricio Pochettino certainly believed as much when he blamed the size of the White Hart Lane pitch on his side’s loss to Newcastle in 2014. He said, “Our style means we need a bigger space to play because we play a positional game. It’s true that White Hart Lane is a little bit tight and it’s better for the opponent when they play deep”.

In reality most Premier League pitches are roughly the same size, with only a metre or two difference in play between them. Pitch sizes can also vary from season to season depending on the preference of the manager and the work of the ground staff. The main thing to take away from this, then, is that if you’re looking at Old Trafford and thinking that the pitch looks bigger than the one at Anfield then the chances are that you’re absolutely correct.

Does size really matter? Pochettino is not the first to suffer pitch problems

Which club has the smallest pitch in the English Premier League? 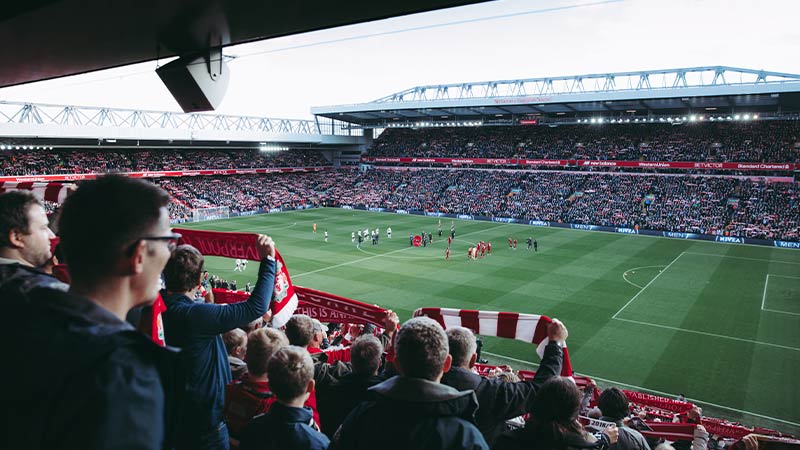